Mycotoxin binders are a valuable tool to help reduce the harmful effects of mycotoxins and prevent performance loss in livestock production. Extensive laboratory testing has demonstrated the advancements made and the significant increases in their effectiveness.

Effective mycotoxin binders need to be tailored to the different structures of mycotoxins. The chemical and physical properties of the estimated several hundred mycotoxins are extremely heterogeneous. Included among the world’s most important mycotoxins are the Asper-gillus toxins aflatoxin B1, B2, G1 and G2, the Penicillium toxin ochratoxin A, the Fusarium toxins fumonisin B1 and B2, zear-alenone, the trichothecene deoxynivalenol (vomitoxin) and T-2/HT-2 toxin.

These mycotoxins form the basis for Biochem studies con-ducted in collaboration with internationally recognised insti-tutes, universities, and laboratories in the USA, Germany, and the Netherlands. The research focused on investigating and documenting mycotoxin-specific binding properties.

Many mycotoxin binders are mainly based on various layered silicates (phyllosilicates), such as bentonite, kaolinite, sepiolite, or vermiculite, the framework silicates (tectosilicates)  like clinoptilolite (zeolite), and amorphous silica such as kie-selguhr (diatomaceous earth). At first glance, the differences between the various types of silicates seem only marginal. However, the laboratory studies clearly show that significant differences in the binding behaviour of these minerals can be detected.

Using the mycotoxins zearalenone and ochratoxin A as examples, Figure 1 clearly shows the qualitative differences in ad-sorption behaviour. The studies investigated the adsorptive behaviour of various inorganic (silicates) and organic (yeast cell wall) raw materials. Experience has shown that the bind-ing properties to aflatoxin B1 are less volatile than to other mycotoxins (see Figure 2). Many minerals are good to very good for binding the Aspergillus toxin aflatoxin B1, whereas the quality of the binding properties to the Fusarium toxin zearalenone or the Penicillium toxin ochratoxin A is subject to significantly higher fluctuations. 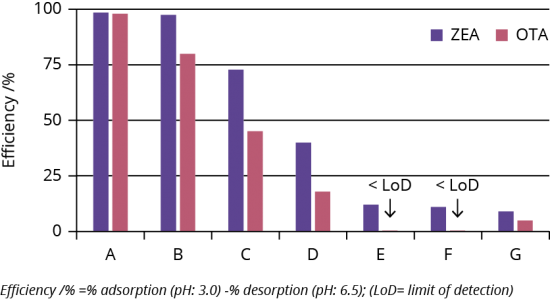 Figure 1 - Comparison of the efficiency of various raw materials for adsorptive binding of zearalenone (CZEA = 2,000 ppb) and ochratoxin A (COTA = 500 ppb). 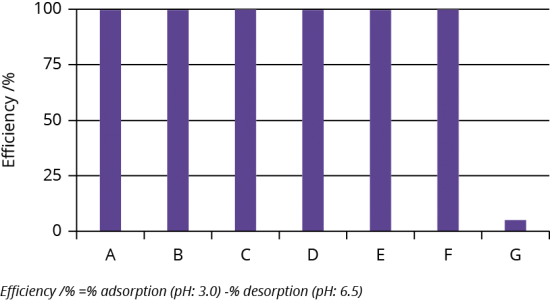 Figure 2 - Comparison of the efficiency of various raw materials for adsorptive binding of aflatoxin B1 (CAFB1 = 500 ppb).

There are many reasons for this difference in binding affinity. The surface charge density and distribution of the analysed components, the spacing between the silicate layers, their pore structure, and geometrical properties of the mycotoxins certainly play a crucial role in adsorption.

The influence of the pH value is highly significant. A change in pH affects both the surface of the toxin binder and the chemical structure of the mycotoxins (neutral or ionic,  depending on the dissociation constant of the mycotoxins). Figure 3 shows that the adsorptive behaviour of the tested toxin binders is very similar under acidic conditions, whereas significant differences can be observed in the neutral or weak acidic conditions. 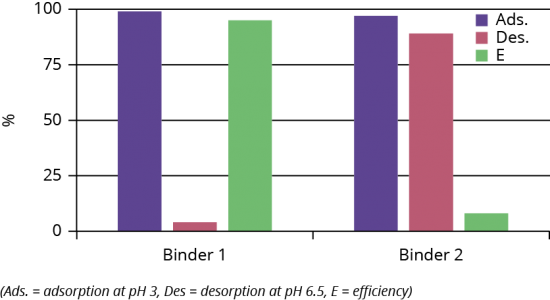 Figure 3 - pH-dependency of the adsorption behaviour of two toxin binders using the example of the mycotoxin ochratoxin A.

Biochem thoroughly analysed the implemented raw materi-als for their binding properties with different mycotoxins at different pH values. The tests included not only natural raw materials, but also raw materials with a surface and pore structure optimised in a variety of ways. Based on these bind-ing studies, the Biotox portfolio of mycotoxin binders was de-veloped . These offer a broad binding spectrum with a wide variety of mycotoxins. This high binding efficiency was demonstrated by in vitro studies conducted by an independent laboratory. In comparison tests with competitor products, the efficiency of Biotox was signifi-cantly higher for the mycotoxins zearalenone, T-2 toxin, ochratoxin A and fumonisin B1. For example, this binder achieved a binding efficiency of 83% for the Fusarium toxin T-2. The value for the strongest competitor product was sig-nificantly lower.

The research showed that the products have a high to very high concentration-dependent binding affinity to various polar and less polar mycotoxins. Depending on the level of mycotoxin contamination in the feed, Biochem mycotoxin binders can reduce the harmful effects of mycotoxins and prevent performance loss.