The balancing act between economy and productivity does not exclude the use of synbiotics. 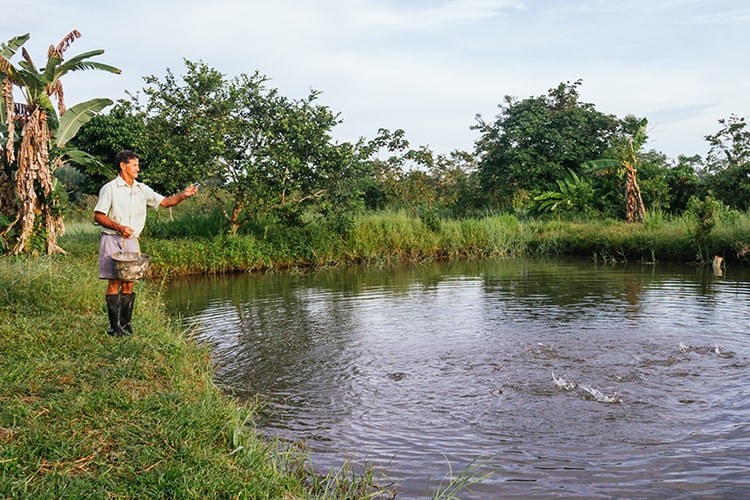 Prices are low within the Nile tilapia (Oreochromis niloticus) producing industry and the most significant cost driver is feed. Thus, farmers and feed manufacturers are looking for cheap raw materials to adapt to the market prices.

But how does this affect the productivity and efficiency of tilapia farming?

Tilapia has become one of the most popular food fish because of its ability to tolerate various tropical environments and to grow relatively fast on feeds containing high plant material levels. Especially in developing and emerging countries this last reason has created feed formulas with reduced protein values. Since growth performance highly depends on the quality of feed, tilapia diets low in protein (<35%) have shown lower performance results than diets with protein levels higher than 40% (Hafedh 1999).

These dietary changes are only one factor affecting the productivity of tilapia farming. There are also environmental issues due to cheap production measures, which have contributed to yield gaps in the main tilapia producing regions of Asia, South America and Africa:

Another important aspect, influenced by these factors are diseases. High temperatures and stressful conditions promote the proliferation of pathogens and increase the risk of infection with e.g. Tilapia lake virus (TiLV) disease. For the economic reasons mentioned above, most tilapia feeds do not contain ingredients to increase disease resistance and thereby to protect the farmer from total yield loss.

How to deal with challenges

There are several ways to address these nutrition and health challenges:

Selective breeding of Nile tilapia has produced more resistant strains, such as the genetically improved farmed tilapia (GIFT). This strain has proven to be less susceptible to diseases and to reaches higher growth performances compared to non-selected strains. Because of its positive attributes, it is now widely disseminated in many farms on the globe. That is also its biggest weakness! A genetically more or less uniform broodstock does not possess a diverse asset of genes. As a result, new generations of fish hardly adapt to new challenges like mutations of pathogenic bacteria and viruses.

It is common sense that antibiotic use in aquaculture should not be a trending measure for the future. Thus, vaccines are under development as a preventive treatment for tilapia stocks – some are already available. Once a fish is vaccinated against a specific disease, the immune system will be prepared for upcoming infections. The biggest obstacle to the use of vaccines is cost. As described above, tilapia is a low-value species and as such, vaccines must be cheap to convince farmers to pay for it. Moreover, it must be easy to apply, like oral vaccination. Otherwise, it causes additional staff costs and more stress for the fish. 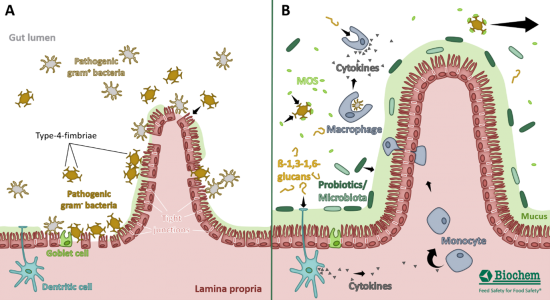 Figure 1: Mode of action with pro- and prebiotics (B) and without treatment (A).

Figure 1: Mode of action of pre- and probiotics. (A) shows the intestinal wall of an untreated fish, which is getting colonized and intruded by pathogenic, bacteria. This suppresses epidermal cell development and mucus production and disrupts the tight junctions that are essential for good intestinal integrity. Such changes open the door to all kinds of pathogens and reduce efficiency and selective nutrient uptake. In (B), the intestinal wall is already colonized by a positive microbiota and supported by probiotic bacteria (Bacilli), which produce anti-microbial metabolites and promote mucus production. MOS blocks the type-4-fimbriae of the gram-negative bacteria to prevent adhesion and to remove the pathogen. ß-1,3-1,6-glucans stimulate leucocytes like dentritic cells and macrophages. Once stimulated, they release cytokines and boost immune functions such as phagocytosis to remove and digest foreign protein or whole (e.g., gram-positive) bacteria and viruses. In comparison to an untreated fish, the intestinal microvilli appear much longer and stronger with an enlarged surface area to take up nutrients.

Although pre- and probiotics are well known for boosting the immune system and supporting digestive functions, the combinatory use is rarely seen in practice. But there are well-documented synergies between both additives. The predominant prebiotics in animal nutrition are extracts from the yeast cell wall. This cellular structure mainly consists of two components:

On the other hand, probiotics are selected bacterial strains, often derived from the genus Bacillus spp. or Enterococcus spp., which have shown positive effects on gut development. Metabolites produced by these bacteria either catalyse digestive processes or protect against pathogens. They further colonize the gut epithelium and thus compete for space with harmful bacteria. This perfectly complements the MOS-effect and results in the excretion of pathogens as well as a low pathogenic pressure inside the intestine and within the surrounding water body.

One product, which combines this synergistic effect of pre- and probiotics, is called Triple P because it combines three “Ps” – Probiotic 1 (Bacillus subtilis) and Probiotic 2 (Bacillus licheniformis) carried by a Prebiotic product. It was recently tested on a trial farm for Nile tilapia in Southeast Asia. 1500 fingerlings (27g) were divided into three groups of fish with 5 replicates.

Table 1: Supplementation of Triple P to diets of trial groups

The trial period started with higher inclusion rates of Triple P for the first 12 weeks. For the last 4 weeks, Triple P inclusion was reduced in both additive groups. Rearing conditions were not optimal, but practical over the whole period of cultivation.
The fish were naturally challenged by:

Figure 2: Documented fish weight during trial period 1 & 2. Relative minimum improvements of the fish weight compared to the control group are given in percent [%].

Interestingly, the performance of fish was about 10% higher compared to the control group, while the FCR had been reduced by approx. -5% from 1.74 to 1.65. Blood analysis of monocytes confirmed that fish fed with Triple P were less challenged (low monocyte count) and thus had more resources to grow. Despite the low monocyte count, phagocytic activity was much higher in Triple P fed groups, which leads to the assumption that these fish were better prepared for pathogenic challenges and diseases. These benefits not only compensate higher feed prices due to the inclusion of a synbiotic but rather increase the income and productivity of tilapia farms in tropical areas and developing countries.

Modern tilapia production is important in order to supply humans with high-quality animal protein at a fair price. Breeding programs have created a basis for intensive production but also introduced new risks to the sector. Such risks, like specialised viral and bacterial diseases, can be either tackled by expensive vaccines or a good combination of pre- and probiotics. Especially this last option adapts perfectly to the current economic limitations and offers more out of less.

If you want to learn more about the product Triple P and how it can be applied to your feed, please visit our webpage or directly contact our product manager!