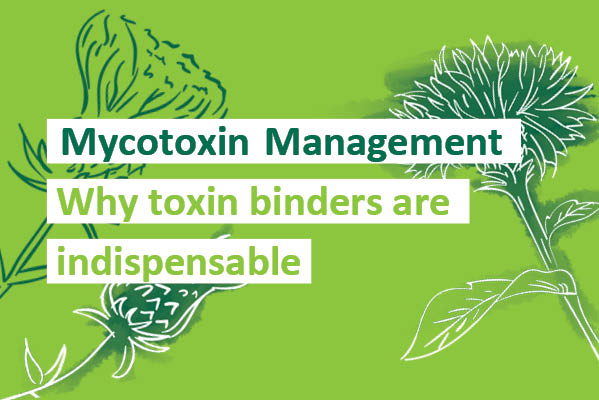 Mycotoxins and the growing importance of suitable control strategies

Mycotoxins are secondary metabolites of certain moulds. This means that they are not any products of normal metabolism, but rather a kind of defense strategy. Mycotoxins are increasingly produced in situations in which the fungus is exposed to so-called stress factors, such as in the course of major temperature fluctuations, persistent dry periods, or prolonged rainfalls during the flowering of the grain. A distinction can be made between field and storage toxins, depending on whether they are produced prior to harvesting in the field, or later during storage.

Mycotoxin levels have gradually increased over the past few years. Their detection is partially a result of more frequent use of higher-quality analytical methods. But fluctuating climatic conditions and greater sensitivity of certain high-yield cereals have also contributed to higher mycotoxin levels. Similarly, the sensitivity to mycotoxins of livestock increased by high-performance genetics. The remarkable progress in breeding over the past 20 years has led to a significantly higher susceptibility to both pathogens and toxic substances, such as mycotoxins. At the same time, due to an increasing resistance to antibiotic agents, there has been a demand to reduce the general use of antibiotics. Consequently, in the interests of improving animal health, the focus is shifting away from treatment, to implementing preventative measures and optimizing external conditions. Feed plays a key role in this respect.

An invisible threat to animal health and biological performance

The impact of elevated mycotoxin exposure entails several problems, some of which are very difficult to isolate. Brief exposure to individual toxins is relatively rare and not nearly as harmful as lower-level mixed contaminations that are often detected under field conditions. This situation is exacerbated by the fact that some mycotoxins have a synergistic effect. The clinical symptoms generally appear as secondary pathologies. Mycotoxins have a variety of negative effects, some of which destroy the body's cells. Symptoms often manifest themselves in the functional failure of affected structures. For example, the intestinal epithelium is one of the first tissue structures to come into contact with mycotoxins after they are orally ingested. Their cytotoxic effects lead to malfunctions. As a result, the gut permeability for adverse substances increases. This in turn enables more endotoxins to penetrate the animal's body, which can lead to clinical symptoms, including ear necrosis or inflammation of the mammary glands. Consequently, one assumes that these symptoms are a result of general diseases that, at first glance, have nothing to do with an increased mycotoxin level.

As in most cases, the dose makes the poison. Moderate mycotoxin levels lead to an unspecific decline in performance, such as lower daily weight gains, poorer feed conversion rates, slightly elevated returns to oestrus, or drops in egg production. However, the consequences can be much more serious with prolonged, elevated mixed contamination that is unforeseeable under field conditions. In addition to observable short-term illnesses, long-term damage can occur in the animal's organs. This can also have a negative impact on the farm's operational structures. An increase in direct and indirect animal losses results in a significantly higher need for restocking. Stable production groups are torn apart. Rectifying such damage sometimes takes years before the original production levels can be reached again.

Suitable strategies aimed at preventing increased absorption of mycotoxins are essential for animal health and operational efficiency. One-sided approaches are less effective when it comes to resolving complex problems. Comprehensive mycotoxin management is a more viable solution. This involves agricultural measures that should be taken into account before, during and after the harvest. Examples include strategic programs in the field, such as sensible crop rotations, or maintaining optimal moisture levels for crop and storage management. Since not all factors, such as the amount of precipitation, are controllable or economically feasible, other concepts can be implemented later. In order to roughly estimate the intensity of the exposure, regular monitoring of the most harmful toxins should take place for the relevant animal species.

Requirements on a toxin binder

The next step is to significantly reduce the bioavailability of mycotoxins with the help of feed additives, or so-called toxin binders. The aim is to bind the various mycotoxins preferably irreversibly so that they can be excreted by the feces together with the toxin binder. This becomes more difficult due to the fact that the different mycotoxins vary considerably in their physical and chemical properties. Consequently, a toxin binder must be capable of adapting to these different molecular characteristics. Certain mycotoxins, such as the storage toxins of the aflatoxin family, are relatively easy to bind due to their more polar nature. On the other hand, the fusarium toxins produced in the field are much more difficult to capture due to their apolar charge distribution. The surface of a potent toxin binder must meet these criteria to the greatest extent possible – and not only under the low pH level conditions in the stomach that are more favorable for the binding process. This bond should also stay stable in the neutral area at the end of the small intestine. The pH level ultimately has a decisive influence on the surface structure of the toxin binder. This surface structure can be physically or chemically processed or activated. Likewise, the specific surface structure, i.e. the relative binding surface, can be increased to a certain degree by appropriate measures. In summary, the following applies:

Exhaustive studies and analyses are therefore necessary to develop such an additive and produce the desired result. The quality of our newest toxin binder is ultimately based on hundreds of adsorption studies with different raw materials followed by various activation processes at decisive pH levels ​​and accompanied by regular heavy metal analyses.