Probiotics: Now & Then,
the Innovation in Gut Health

Probiotics, their History, and Importance

In fact, the history of probiotics in human nutrition already begun tousands of years ago with the consumption of dairy products. The domestication of dairy animals such as sheep and goats began approximately 10,000 years ago in South West Asia. Especially the raising of cattle 2,000 years later was a major kickoff for dairy products. Ancient pottery from the Neolithic period (5,000-10,000 years ago) shows that milk has been stored for a longer period, leading to naturally souring processes and most likely the first dairy product, yogurt. Not knowing that fermentative bacteria were responsible for this acidification and preservation of milk, mankind has begun to consume the first probiotics. Although yogurt was strongly associated with health and overall well-being throughout its history, the responsible microbes were not discovered until the beginning of the 20th century. 1907, the Russian scientist and Nobel prize winner Élie Metchnikoff noticed the longevity (older than 100 years) of some Bulgarian locals who consumed a yogurt drink daily. His scientific curiosity was the driver for uncovering the health-beneficial bacterial cultures in a dairy product, a milestone in the history of probiotics. It took another half-century until the term probiotics (“for life”) was firstly introduced by the German microbiologist Werner Kollath. He described them as health-supportive active substances and antonym of antibiotics. However, the current definition for probiotics was formulated in 2001 by FAO/WHO and states that probiotics are “live microorganisms which, when administered in adequate amount, confer a health benefit to the host.”

The world’s population is continuously growing, which increases food consumption, including the demand for animal products. In this regard, efficient and sustainable animal production is one of the main challenges for farmers, food industries, and researchers worldwide. Efficient animal production is strongly associated with the overall well-being of the animals, including intestinal health as a major factor. In the last fifty years, antibiotics and pharmacological dosages of zinc oxide have been considered tools to prevent an overgrowth of intestinal pathogens and maintain animal performance. However, the ban of antibiotic growth promoters and the upcoming ban of therapeutic levels of zinc oxide in the EU, but also in other regions, drove the need for reliable and more environmentally friendly alternatives. Thus, a tremendous range of different feed additives, including probiotics, are circulating globally to support commercial livestock farming by improving gastrointestinal function. Based on extensive literature documenting various in vitro and in vivo studies, probiotics seem to be one of the most promising and environmentally friendly choices to improve animal performance and farm profitability by supporting intestinal health.

Today, especially spore-forming Bacillus species and lactic acid bacteria (LAB) are commonly used probiotics in animal nutrition. Driven by their spore-forming capabilities, Bacillus-based probiotics are well-known for their heat resistance, making them great candidates for standard pelleting processes. They also inhibit intestinal gram-positive pathogens such as C. perfringens and are widely used in monogastric animal production. In contrast, LAB-based probiotics producing high amounts of lactic acid, which improves the intestinal environment by lowering the pH and leads, among other benefits, to the stimulation of “good bacteria” and suppression of gram-negative pathogens such as Salmonella species. However, LAB are sensitive to heat and pressure and thus unpractical for pelleted feed. Although each probiotic comes with its own upsides and downsides, all are known to improve animal performance, including daily weight gain and feed utilization.

B. coagulans DSM 32016 - Our innovative Multi-Talent

Lactic acid production: An in vitro study showed that B. coagulans DSM 32016, in contrast to others, reliably produced high amounts of lactic acid (Figure 1, B). 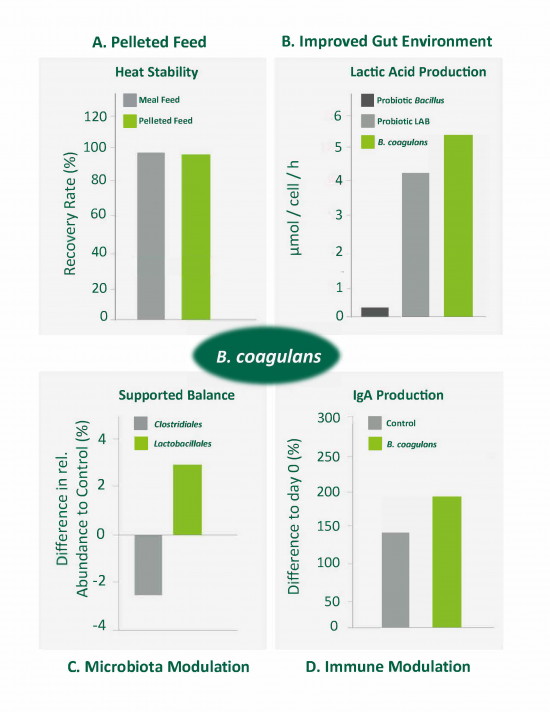 Immune modulation: Immunological blood serum analysis indicated that animals fed with the probiotic had higher immunoglobulin A levels in blood serum. IgA is the first line of defense and can inhibit the adhesion of harmful bacteria and viruses to epithelial cells (Figure 1, D).

Beat the Bad with the Good

Based on these findings, B. coagulans DSM 32016 successfully controlled the performance drop in broiler caused by C. perfringens and S. typhimurium.

Figure 2. Controlling effect of B. coagulans DSM 32016 on performance drop in pathogen-challenged broilers.

Similar results were observed in another broiler trial, in which birds were also challenged with C. perfringens. Compared to the Clostridium-infected control group, B. coagulans DSM 32016 increased the DWG by 14%, improved the FCR by 15%, and decreased the mortality by 3%. Histomorphological analysis of the gut epithelium of pathogen-challenged broilers demonstrated an apparent increase of the villi high/crypt depth ratio in the duodenum and jejunum when B. coagulans DSM 32016 was fed (Figure 3). These findings show the stimulating effect of B. coagulans DSM 32016 on the gut epithelium, enhancing the surface for nutrient absorption and improving feed conversion. 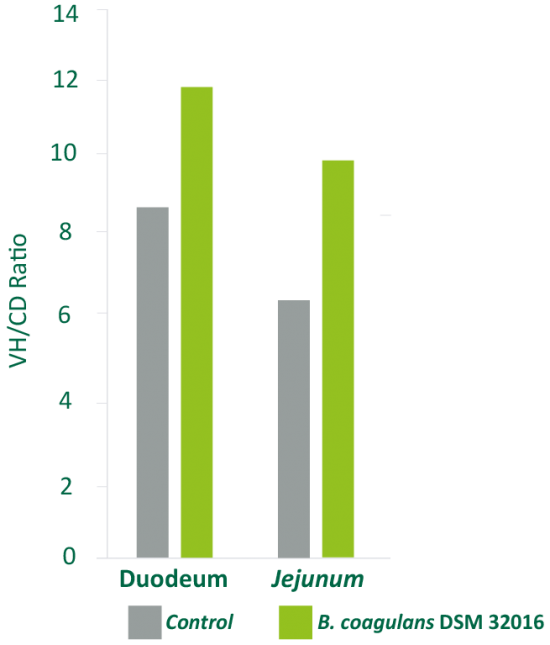 Figure 3. Histomorphological analysis of the gut epithelium determining villi high/crypt depths ratio to demonstrate the stimulating effect of B. coagulans DSM 32016 on the epithelial growth.

A healthy, efficient, and profitable livestock animal starts with taking care of its insides, the intestinal tract. A novel probiotic, B. coagulans DSM 32016, is doing just that. Positive modulation of the intestinal microbiota, which includes the suppression of pathogenic and stimulation of health-beneficial bacteria, positively affects important zootechnical parameters, such as feed conversion ratio, daily growth, and mortality. Various studies done with B. coagulans DSM 32016 show that this probiotic uses a broad range of modes of action to reliability and efficiency support farmers by keeping their birds healthy and exploiting the animal’s genetic potential in a natural way.

If you want to learn more about the probiotic Bacillus coagulans DSM 32016, feel free to contact our expert or read our latest articles about it: News / Biochem