The Link To Overall Animal Health

The Gut Microbiome: More Than You Think

“Let thy food be thy medicine and medicine be thy food” 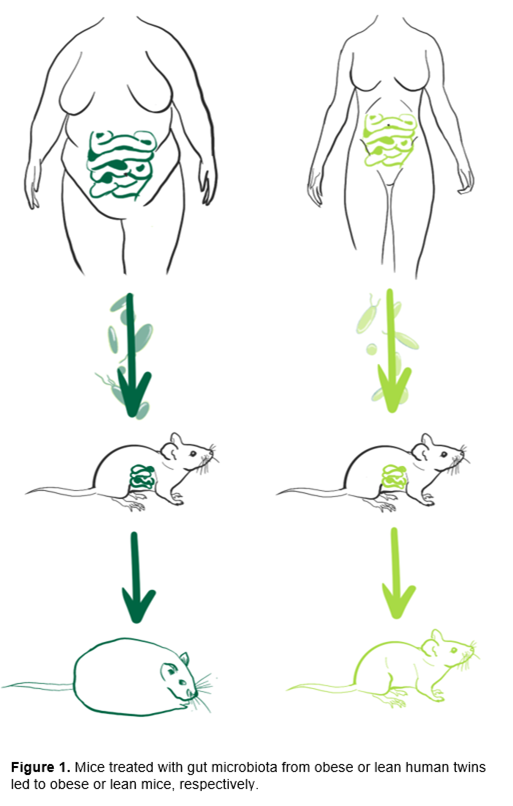 This historical quote is often accredited to Hippocrates (Greek physician 400 BC) and highlights the importance of diet to overall well-being. However, at that time, it was not known that an unseen key player, the gut microbiome, played a key role in the dynamic impact of diet. Today, we know that around two kilos of microbes colonize the adult human intestine. This complex community consists of nearly 100 trillion microbes and has been the focus of human research for many decades. Especially in recent years, more and more fascinating facts about the importance of the gut microbiome are coming to light. For example, the conditions and functions of the gut microbiome can regulate anatomically distanced organs such as the brain and lungs. Based on enteric, spinal, vagal, and hormonal pathways, microbial metabolites can affect behavior, emotions, and moods ranging from anxiety to depression. Emphasizing the tremendous impact of the intestinal microbiome on brain activity, Anderson et al. pointed out in 2017 that “some of your deepest feelings, from your greatest joys to your darkest angst, turn out to be related to the bacteria in your gut”. Likewise, it has been shown that there is a crosstalk between the gut microbiome and the lung microbiome via the lymphatic and blood systems, a link that can influence and support respiratory health. Furthermore, there is evidence that the activity of gut microbes is associated with other body parts, such as muscles and bones, as well as host metabolism. Ridaura et al. showed in 2013 that germ-free mice inoculated with the microbiome from obese or lean human twins led to obese or lean mice, respectively (Figure 1). This experiment clearly demonstrates the effect of the gut microbiome on feed conversion, weight gain, and other core processes in the host.

The Impressive Power of Probiotics

Unlike antibiotics, which kill microbes, probiotics are live microorganisms with numerous modes of action that support the 'healthy' microbiome, optimize the gut environment, improve digestion, and stimulate the immune system. Since animal health is closely connected to a 'healthy' gut, probiotics offer a promising way to enhance overall well-being and performance potential.

Many scientific publications show that probiotics are a highly effective tool in animal nutrition because they can improve health and performance. Especially spore-forming Bacillus and lactic acid bacteria (LAB) are commonly used probiotics for more efficient animal production. Bacillus-based probiotics are well known for their spore-dependent heat resistance. This makes them ideal for different feed formulations and types, including pelleted feed. Along with other modes of action, such as digestive enzyme production, these probiotics inhibit intestinal gram-positive pathogens. On the other hand, LAB-based probiotics produce high amounts of lactic acid which improves the intestinal environment by lowering the pH, leading to the stimulation of beneficial gut bacteria and suppression of gram-negative pathogens. However, LAB probiotics are sensitive to heat and pressure, which makes them unsuitable for pelleted feed. Although each probiotic strain comes with its own characteristics and strengths, they are all generally known to improve animal performance, including daily weight gain and feed utilization.

B. coagulans is a very unique microbe that combines the benefits of both Bacillus-based and LAB-based probiotics. It and has an outstanding reputation in medicine as a probiotic that reliably supports intestinal health, the immune system, and overall well-being in humans. B. coagulans is primarily used to treat gastrointestinal disorders, including diarrhea, abdominal pain, digestive problems, and overgrowth of harmful bacteria. By acting as an anti-diarrheal agent that supports gastrointestinal integrity and prevents weight loss, B. coagulans is also highly effective in treating antibiotic-induced gut dysbiosis. Jäger et al. summarized the outstanding benefits of B. coagulans on protein digestibility in 2018. According to the literature, the probiotic efficiently increases the utilization of dietary protein, which enhances intestinal absorption of amino acids and muscle health. In fact, B. coagulans improved protein utilization by 10% in swine.

Biochem used this wide-ranging knowledge to develop its own reliable probiotic powered by B. coagulans DSM 32016, which is the first B. coagulans approved for animal nutrition by the EU commission. As with strains of B. coagulans used in human medicine, B. coagulans DSM 32016 has demonstrated extraordinarily good results in stabilizing the performance and overall health of farm animals. The positive impact of B. coagulans DSM 32016 on livestock has been demonstrated in many studies worldwide. In a recent broiler study with one day old chicks (Arbor Acres, Thailand 2021), B. coagulans DSM 32016 displayed a remarkable impact on overall health and fitness. In comparison to the control group, the probiotic improved daily weight gain (DWG) and increased feed digestibility as reflected by a significant reduction of the feed conversion ratio (FCR) (Figure 2). In fact, broilers fed with the probiotic showed an improved crude protein (CP) digestibility and were able to significantly extract more energy (GE) from ingested feed (Figure 2). As a result, the European production efficiency factor (EPEF) was enhanced (Figure 2), a finding also based on a nearly 1% increase in survival rate. B. coagulans DSM 32016 also significantly improved flock uniformity (FU) (Figure 2), an important parameter for optimizing feed formulation or carcass processing as well as for final sales.

Furthermore, microbiological analysis demonstrated the microbiome-modulating properties of B. coagulans DSM 32016. Supplementation of the probiotic increased health-beneficial bacteria and reduced harmful bacteria. Improved intestinal health and digestibility have the potential to enhance fecal consistency, which increases litter quality and foot health. In fact, fecal scoring indicated a better fecal consistency in birds fed B. coagulans DSM 32016. Likewise, the moisture content of litter was reduced. Although none of the birds had severe foot pad lesions, initial foot discolorations were significantly fewer with probiotic-treated broilers.

A healthy livestock animal is dependent on the status of its intestine. B. coagulans DSM 32016 was specially developed by Biochem to protect intestinal integrity and help maintain a balanced microbiota. The latest studies clearly indicate the wide-ranging beneficial properties of B. coagulans DSM 32016 and its ability to enhance:

B. coagulans DSM 32016 is the unique multi-talent for your animals’ health and productivity.

To learn more about B. coagulans DSM 32016 and its application in animal feed, visit our website or contact a Biochem expert for details.