A Faithful Fighter -
Against Bad Bugs in Animal Livestock 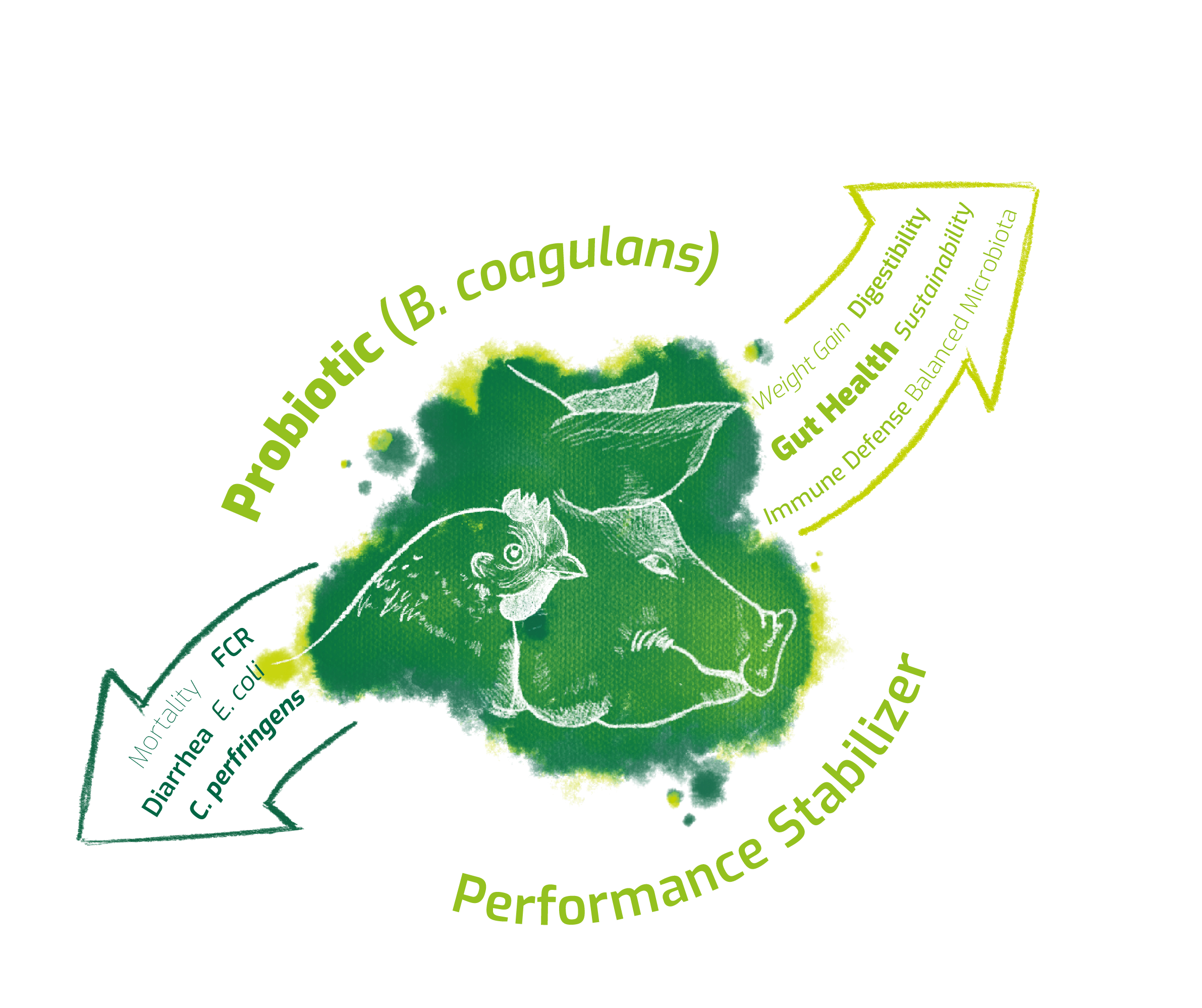 An animal's digestive tract is colonized by a complex community of highly diverse microbes known as gut microbiota. Microorganisms in the gut fight a constant battle for nutrients and space, making the intestinal lumen a virtual war zone. The balance between pathogenic and beneficial bacteria is crucial. A shift towards pathogenic bacteria can lead to impaired gut health and associated infections with a negative impact on overall animal health and performance.

Antibiotic growth promoters (AGP) and high dosages of zinc oxide (ZnO) were once considered an effective tool to keep pathogenic bacteria under control. However, based on the increasing numbers of multi-antibiotic resistant pathogens and heavy metal accumulation in the environment, more and more government agencies have banned, or are planning to prohibit, these agents as performance-stabilizing feed additives. This global trend has spurred other nutritional solutions that offer equal, or even better, effectiveness. In this regard, probiotics are regarded as an efficient way to prevent the overgrowth of harmful bacteria and stabilize animal performance.

Most research associated with animal nutrition and probiotic feeding strategies relates to the competitive exclusion or the direct inhibition of pathogens in the gut. These strategies are aimed at reducing colonization or decreasing harmful bacteria populations in the gut while promoting the growth of beneficial bacteria. It has been shown that efficient probiotic production of lactic acid in the intestine lowers the pH in the gut and worsens the milieu for pathogenic bacteria like C. perfringens and E. coli. At the same time, health-beneficial bacteria like Lachnospiraceae profit from lactic acid as they can use this organic acid as a substrate and produce butyrate.

ZnO and AGP Out, Probiotics In

Powered by Bacillus coagulans DSM 32016, TechnoSpore® is the first Bacillus coagulans‐based probiotic for animal nutrition approved by the EU under the Feed Additives Regulation (Regulation [EC] No 1831/2003). This specific bacterial strain utilizes many different modes of action to beneficially modulate the intestinal microbiota. These include suppressing harmful bacteria through competitive exclusion as well as direct inhibition. Biochem has conducted several studies, both in vitro and in vivo, to test the inhibitory efficacy against pathogens in livestock farming.

In collaboration with the Free University of Berlin, it was possible to study the inhibitory potential of Bacillus coagulans DSM 32016. The research group investigated the specific growth rate of two different potentially harmful E. coli strains (isolated from piglets) co-incubated with the supernatant from Bacillus coagulans DSM 32016 cultures in buffered media. The results of this in vitro study showed that the specific growth rate of both pathogenic E. coli strains was reduced when Bacillus coagulans-driven supernatant was added (Figure 1). This demonstrates direct inhibition of E. coli by metabolites produced by B. coagulans.

To prove this inhibitory activity against E. coli demonstrated in vitro also in vivo, the positive effect of Bacillus coagulans DSM 32016 administration on digestive disorders was investigated in a trial with weaned piglets in Brazil. Associated results demonstrated that the supplementation of Bacillus coagulans DSM 32016 led to reduced E. coli counts in feces and significantly improved fecal consistency, suggesting healthier intestinal conditions (Figure 2). These findings were reinforced by an improved performance including an enhanced final body weight of 2.0%. Both studies (in vitro and in vivo) confirm the inhibitory potential of B. coagulans against intestinal E. coli and an associated improvement of intestinal health, diarrheal incidence, and performance. 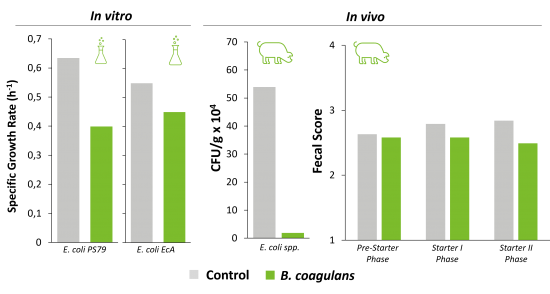 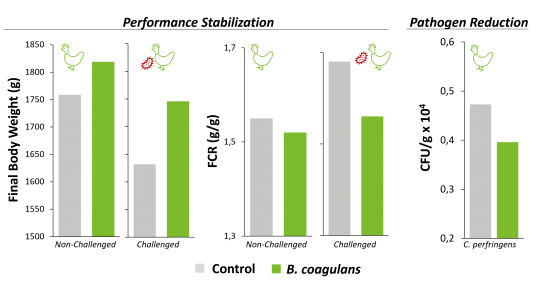 Similar results were observed in another broiler trial in which birds were also challenged with C. perfringens. In comparison to the challenged control group, B. coagulans increased the DWG by 14%, improved the feed conversion rate (FCR) by 15%, and reduced the mortality rate by 3%. In another recent trial that included microbiological analysis of ileal digesta samples, it was demonstrated that the administration of B. coagulans leads to a clear reduction of C. perfringens counts in the intestines (-16%, Figure 1). Based on these findings, B. coagulans successfully controls the severe C. perfringens-caused performance drop in poultry, which is most likely driven by a successful reduction of this pathogen in the intestines of the birds.

TechnoSpore®, based on B. coagulans DSM 32016, is an effective tool to fight and control pathogen-caused performance drops in piglets and poultry. The trials confirm that this control is possible without the usage of AGPs or ZnO. Overall, the administration of probiotics has a positive impact on animal health and farm sustainability. Therefore, a potent probiotic strain like B. coagulans DSM 32016 helps to manage and prevent gut-associated disorders in piglets and poultry caused by specific pathogenic bacteria.

TechnoSpore® reliably controls the negative impact caused by an intestinal overgrowth of pathogens. As a result, it helps maintain farm sustainability through stabilized performance, including weight gain, feed conversion, and overall intestinal health.