Endotoxin Stress – How to minimize the risk for your animals

The impact of endotoxins on the health status of our livestock as well as humans is a red-hot topic of these days. But how can we successfully face this ever-present risk? First, we should investigate the nature of endotoxins themselves. Building on this, we can create and implement a strategy that mitigates their potential harmful effects.

Endotoxins are building parts of the cell wall of gram-negative bacteria. In turn, gram-negative bacteria are common participants of every microbiome. From a chemical point of view, endotoxins are thermostable glycolipids, for this reason they are also called lipopolysaccharides (LPS). Here the lipid-part of the molecule constitutes the real endotoxin. LPS are released during a destabilization of the cell wall, thus due to bacterial lysis or also proliferation. Unlike bacterial exotoxins they are not any kind of weapon, but simply building components, which exert their toxic effects only in free form. Moreover, these impacts depend on where the endotoxins are located and the affected animal species.

Thus, endotoxins are a natural part of our environment, but under which circumstances do they become a risk?

Endotoxins are a marker for an attack by gram-negative bacteria. Therefore, there is a regular controlled uptake of endotoxins by the gut epithelium in order to train the immune system. However, if higher amounts get inside the organism than the liver is able to immediately neutralize, they are going to be further disseminated with serious consequences.  But first it is important to look at the circumstances leading to an increased uptake. As long as the endotoxins remain in the gut lumen, they do not stringently constitute a risk to animal health. This situation changes in case of an impaired gastrointestinal barrier being unable to keep up its shielding function. The following factors may impair gut integrity, leading to an increased permeability of the gut:

Ischaemia (reduced blood flow) for example due to heat stress

Already at low concentrations, mycotoxins constitute a particular threat to gut integrity. They inhibit the protein biosynthesis, cause oxidative stress, and some of them, such as deoxynivalenol (DON), even manipulate the gene expression of epithelial cells. So, it was shown in scientific studies, that DON reduced the forming of certain building proteins of the tight-junctions1.

Effect of mycotoxins on the gut epithelium

What are the consequences of an uncontrolled uptake of endotoxins caused by an increased gut permeability?

The impacts of an increased uptake of endotoxins depend on the absorbed quantity and the affected animal species. Ruminants, pigs and horses for example are much more sensitive compared to dogs, rats or poultry. If the tolerated maximum dose per affected species is exceeded, a complex inflammatory response of organism occurs in the body. Consequently, not the endotoxin itself is harmful, but the severe reaction to it given by the immune system. The more endotoxins invade, the more devastating is the extent of this reaction.

In case high quantities of endotoxins get into the blood circulation at once, this will lead to consequences affecting the entire organism. Lesions such as vascular damages, coagulopathies, haemorrhages and necrosis may finally lead to an endotoxin shock resulting in organ failure with potential lethal ending. But if there are latently arriving quantities of endotoxins, permanently overloading the buffer systems to a low to medium degree, that will lead to so called endotoxin associated diseases. These are shown by milder systemic reactions and more locally demarcated inflammatory lesions. The clinical picture may vary regarding the different animal species.

In pigs for example the “Swine Inflammation and Necrosis Syndrome” (SINS) is related to endotoxin stress. The clinical signs may be shown in the form of ear and tail necrosis, but also by other inflammatory processes even in suckling piglets receiving milk containing higher endotoxin quantities. Likewise, cattle react in a quite sensitive way to increased amounts of endotoxins. As a result, for example the development of various metabolic diseases such as laminitis, milk fever or ruminal acidosis can be substantially promoted.

Since endotoxins belong to the natural environment, it is impossible and by the way also unwise to eliminate them entirely. It is rather a question of keeping a healthy balance regarding the uptake of endotoxin quantities. Because this balance can be disturbed by multiple factors, a successful counter-concept should be just as complex. For this purpose, the following aspects may be influenced by feed additives:

1. The integrity of the gastrointestinal barrier

The centerpiece of a smart endotoxin management concept should be the preservation of gut integrity. Mycotoxins disrupt the gastrointestinal barrier, cause oxidative stress, and strain liver metabolism. Consequently, an efficient mycotoxin management reduces the risk for endotoxin associated diseases.

Additionally, further additive groups are able to stabilize the gastrointestinal barrier from both sides. Betaine for example supports cells of the gut epithelium to preserve their intracellular osmotic pressure even during challenging conditions. On the back of this, betaine provides numerous beneficial effects on important metabolization processes in the liver.

Trace elements such as zinc, copper and manganese may also contribute to gut integrity. Forming central hubs in important enzymes, they play major roles in detoxifying, immunological and metabolic processes. With their improved bioavailability, organically bound trace elements allow a more efficient use of these essential micronutrients.

2. The quality of the microbiome

An overgrowth of gram-negative bacteria in the intestine can lead to an increased release of endotoxins and induce inflammatory processes. High quality pre- and probiotics are able to give this sensitive system more stability. Furthermore, they provide even added values like increased bioavailability of nutrients or support of the immune system.

The enterally absorbed endotoxins are transported directly to the liver by the portal blood stream. In the first place, the liver is responsible for their fast and efficient neutralization. Consequently, additives promoting detoxifying processes and liver metabolism can be an effective supporting tool against endotoxin stress. 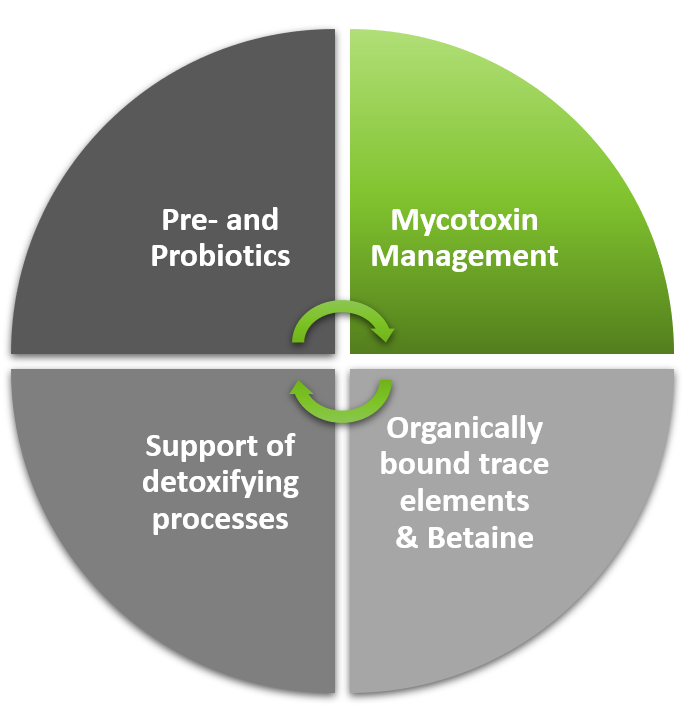 Endotoxins belong to the usual environment of our livestock and humans as well. Animal nutrition is not able to generally defend any gram-negative bacteraemia. Similarly, a healthy balance will not be realizable by one single magic remedy.

But a smart concept of feed additives, reducing the uptake of endotoxins on the one hand and promoting their clearance on the other hand, can obviously reduce the risk of a pathological increase of these highly reactive bacterial cell wall components inside the organism. The preservation of gut integrity is the centerpiece of such a concept. Mycotoxins with their cytotoxic effects play a decisive role in destabilizing gut integrity. Additionally, they severely strain liver metabolism. Accordingly, their efficient neutralization constitutes a decisive component in a successful endotoxin management.

Biochem`s broad based product range provides all kind of additives necessary to that end in an ultimate quality and efficiency. We look forward to support you with our expertise in evolving your individual endotoxin management concept!