Stress management in aquaculture with TechnoYeast

What is the greatest danger in every fish and shrimp farming operation? Stress! Animals under stress lose their appetite, stop growing, do not reproduce, are susceptible to diseases, and die within a short period of time. There are several types of stress known in aquaculture. These can be summarized as follows:

Some of these stress factors can be managed, such as reducing the stocking density and water treatments or ensuring gentle handling methods. But others are unavoidable. This is because they are either part of the production cycle, frequently appear due to seasonal changes, or are linked to limited resources. Thus, stress management is an essential part of successful aquaculture.

Stress factors that are unavoidable must be mitigated to reduce their effects. Therefore, natural defenses, like a robust skin and a strong immune system, have to be supported. But only in rare cases is mortality in aquaculture directly linked to stress induction, like suffocation from low oxygen or bleeding wounds from improper handling. Most fish and shrimp die after a secondary infection. Because any kind of stress lowers these natural defenses and opens the door for pathogenic bacteria, viruses and parasites. Thus, along with stress prevention, the pathogenic pressure must be kept at a low level to prevent these secondary infections.

Prevention from a medical point of view perfectly applies to stress and disease management. There are three levels of (stress) prevention:

In fact, the medical model of prevention also describes a quaternary level. It includes the avoidance of unnecessary treatments. In aquaculture, these treatments can be of a physical nature, like improper handling, and may cause additional stress. But antibiotic treatments should also be avoided with alternative and environmentally-friendly measures.

Functional ingredients on the rise

The most direct preventive measure against stress and disease in animals is to strengthen their natural defenses through the feed. Fortunately, feed additives that have been selectively used in so-called "functional feeds" are well on their way to becoming an integral part of standard aquafeed formulations. Today, we will take a closer look at an outstanding feed additive that combines multiple levels of prevention – TechnoYeast.

TechnoYeast is a hydrolyzed yeast based on Kluyveromyces fragilis (also known as K. marxianus). In its unhydrolyzed form, K. fragilis has already been shown to modulate the gut microbiota and counteract soybean meal-induced enteritis in Atlantic salmon at 200 g/kg intake (Grammes et al. 2013). Compared to other yeast species, like Saccharomyces cerevisiae, K. fragilis has shown a higher potential to replace fish meal in Atlantic salmon diets (Øverland et al. 2013). To date, K. fragilis can be seen as one of the best choices among yeasts when it comes to digestibility in fish. Consequently, hydrolysis, the enzymatical pre-digestion of K. fragilis, further enhances the nutritional potential of TechnoYeast. On the functional side TechnoYeast has a lot to offer:

Ease the pressure and reduce stress

To test whether TechnoYeast can reduce stress during production, four groups of rainbow trout were fed three different dosages of TechnoYeast (0.5%, 1.0% and 2.0%) added to a commercial diet (control). After this 90-day trial period, blood samples were taken. Blood analyses are often used to get an idea of the current immune status of animals, such as by determining the number and composition of white blood cells (WBC) as part of the innate immune system. Peters and Schwarzer (1985) described the relationship between elevated levels of WBC with a dominant abundance of neutrophils in the blood of rainbow trout and exposure to various types of stress. 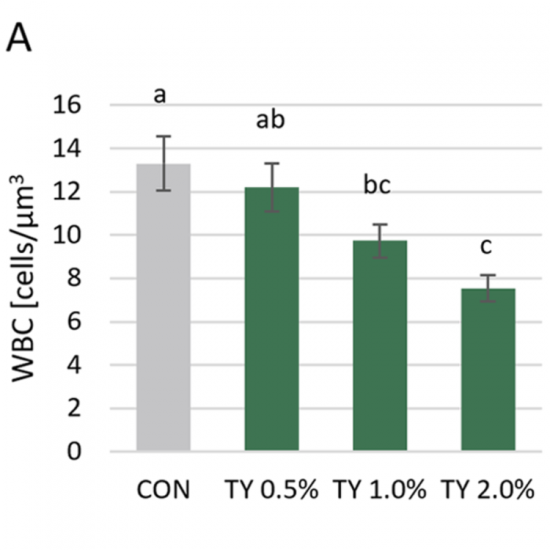 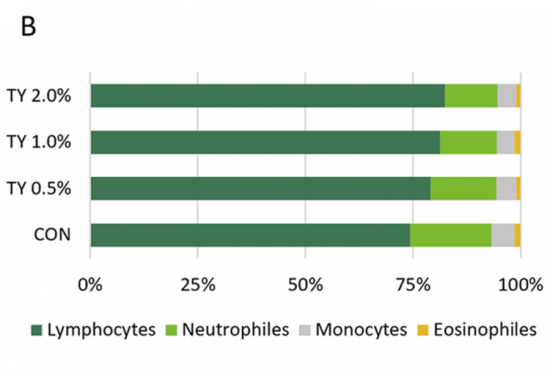 Figure 2b: B shows the composition of white blood cells (WBC). A WBC composition with increased neutrophils may be a sign of acute inflammation. Different letters accompanying bars denote significant differences (P < 0.05; n = 3)

Blood analysis of rainbow trout fed TechnoYeast showed a significant reduction in the total number of WBCs and a significantly lower abundance of neutrophils compared to untreated fish (Fig. 2 A and B). Despite the same production environment, these fish appeared to be less stressed. These observations were confirmed by analysis of liver enzymes such as lactate dehydrogenase (LDH), aspartate transaminase (AST) and alanine transaminase (ALT) (Fig. 3). LDH, AST, and ALT are commonly used as indicators for assessing liver health in relation to intoxication and tissue damage (Bury et al. 2003, Parveen et al. 2017). 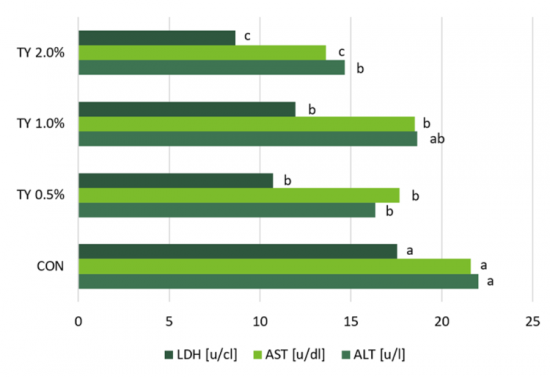 But what is the benefit to the farmer?

Assumingly, a fish or shrimp that spends less energy on combating pathogens and toxins can use the saved energy for growth. The performance data from the abovementioned trial showed that the fish grew significantly faster with increasing dosages of TechnoYeast (Fig. 4). The average FCR was reduced from 0.79 to 0.61, and final weight was improved by up to 26%.

Alternatively, the saved energy can be used as a buffer to cope with stressful situations. For example, instead of producing WBC, the organism may produce relevant enzymes such as superoxide dismutase (SOD) to compensate for stress-induced production of radical oxygen species (ROS) (Slaninova at al. 2009). According to this, fish fed TechnoYeast should have an increased stress tolerance. For this purpose, fish from all four treatment groups were sampled and subjected to thermal stress. Warm water is a seasonal threat to many trout farms. Due to the relatively long observation period of one week with increasing temperatures (10° to 28°C in 7 days), the feeding regime was continued. Although rainbow trout prefer temperatures well below 20°C, fish fed TechnoYeast continued to consume feed at high rates even above 20°C. In contrast, fish from the control group radically reduced their feed intake (Fig. 5 B). Also, the survival rate of TechnoYeast-treated fish was 10 to 20% higher than that of the control group at each temperature level (Fig. 5 A). Thus, the original hypothesis was confirmed. 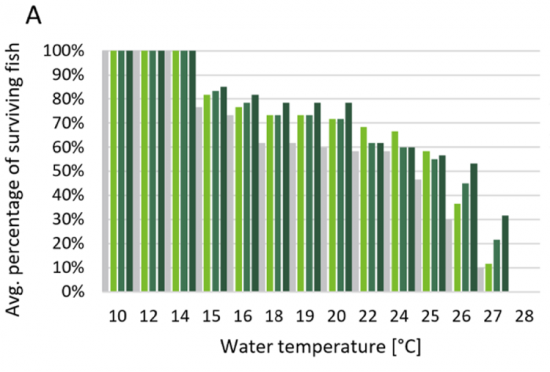 Figure 5a: A shows the survival of fish during a 7-day thermal challenge. The temperature was increased by about 2.5°C every day. Treatment groups, which were fed TechnoYeast at 1% and 2% inclusion (TY 1.0% & TY 2.0%) had about 10-20% lower mortality at different temperature levels compared to the control group (CON). There was no mortality observed in the negative control group at constant 10°C water temperature. 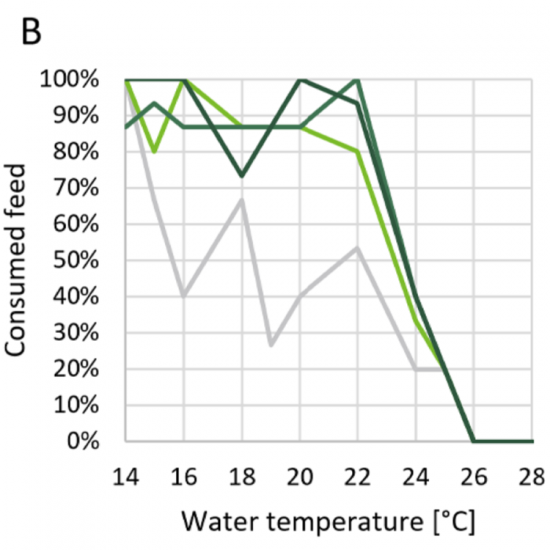 Figure 5b: B shows the consumed feed from standard feeding regime during thermal challenge. TechnoYeast treated groups (TY 0.5%, TY 1.0%, TY 2.0%) continued feeding at high rates even at temperatures above 20°C. The negative control (not shown) was normally feeding at a constant temperature of 10°C. (n=3)

Regarding the three levels of prevention mentioned at the beginning, TechnoYeast seems to contribute to all of them – before, during and after a stressful situation:

Moreover, unpublished data on Aeromonas hydrophila resistance in fish fed TechnoYeast indicate strong protection against bacterial pathogens. It can be considered a valuable tool for reducing antibiotics, and as such, TechnoYeast can even cover the 4th level of prevention. Hence, to cope with stress and diseases in aquaculture, there is now an all-in-one solution! 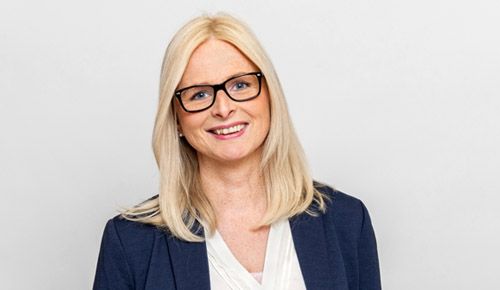