How to Improve Young Animal Performance with Tasty Functional Protein

TechnoYeast a novel and innovative product based on hydrolysed yeast Kluyveromyces fragilis, which ensures high feed-intake in weaned piglets. Recent studies confirm positive effects on gut health, feed-intake and performance, which make TechnoYeast to a perfect replacement or complement to other high-quality functional protein sources such as blood plasma.

Weaning day – a critical day in the life of piglets

Weaning is considered as one of the most significant events in the life of a pig, accompanied by a high incidence of intestinal disturbances and diarrhea, leading to suppressed growth performance. In modern pig production piglets are abruptly weaned at an early age (21-28 days of age), which is highly unnatural for them. In wildlife conditions piglets are gradually weaned at 12 to 17 weeks of age with a higher level of maturity. The reduction in weaning age occurred largely due to economic reasons (e.g. improved sow productivity), but is characterized by a high incidence of intestinal disturbances such as diarrhea and subsequent poor growth after weaning.

The immediate effect of weaning is a dramatic reduction in feed intake. While approximately 50% of weaned piglets started to eat within the first 24 hours post-weaning, in about 10% of piglets no feed intake was observed within the first 48 hours post-weaning (Brooks et al., 2001). These different risk factors at weaning lead to malnutrition and marked changes in intestinal physiology, microbiology and immunology. As a consequence, weaned piglets are highly susceptible to pathogenic enteric diseases such as post-weaning diarrhea, which can cause large economic losses. Within the EU pig population, total losses in the rearing period of weaned piglets amount to approximately 3%. A substantial proportion of losses in pig production can be associated with infections via intestinal mucosal surfaces.

Nowadays it is well-known, that a sufficient and stable feed intake in the first days after weaning is one of the key factors in successful piglet rearing.

A low feed intake after weaning can negatively affect:

Therefore, it is extremely important to use diets which ensure a high feed intake. Pigs are known to be very taste sensitive and have a relatively large tongue with one of the highest number of taste buds (N = 19,904) in mammalian species. Umami-tasting amino acids such as glutamic acid are rich in animal protein sources and have been reported to activate specific taste receptors on the tongue and drive appetite for the diet. Highly palatable and digestible protein sources such as milk powder and porcine blood plasma are known to have positive effects on feed intake and intestinal morphology. But also other diet features such as a well-balanced profile of essential amino acids (i.e. Lys, Met, Trp and Thr) are important drivers of feed selection and intake in piglets. 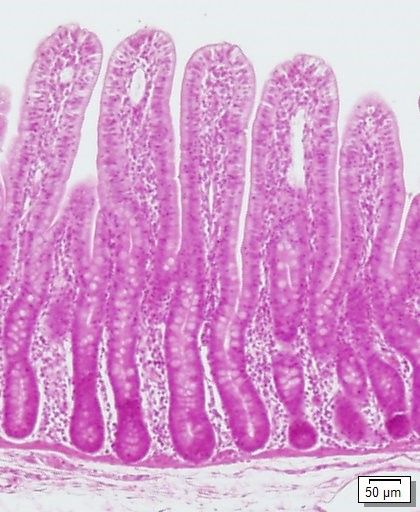 Hydrolyzed yeast is a relatively novel feed material in animal nutrition and relies on hydrolysis of yeast products (e.g. Kluyveromyces fragilis). Hydrolysis is a gentle method to preserve all nutrients. Following the hydrolysis process yeast cells are broken down in yeast cell wall components (30%) and yeast extract (70%). Due to their high amounts of umami-taste amino acids, peptides and nucleotides, hydrolyzed yeasts are known to improve the palatability of food. The hydrolysis process leads to an increase in the availability of intracellular compounds such as umami-taste amino acids and nucleic acid/nucleotides and consequently enhances feed consumption in the post weaning period. The most commonly used yeast strain include strains from Saccharomyces spp. of which S. cerevisiae is the most well-known and studied, more commonly known as baker’s yeast. Currently other yeast strains such as Kluyveromyces spp. are getting an increased attention for application in animal nutrition. Compared to S. cerevisiae, yeasts based on K. fragilis are high in crude protein and amino acids, e.g. glutamic acid resulting in a higher potential to improve palatability. Particularly for piglet nutrition, Kluyveromyces yeast seems to be advantageous due to its specific taste. The positive effects of hydrolyzed yeast based on K. fragilis (TechnoYeast, Biochem) on feed intake after weaning compared with non-hydrolyzed yeast or soybean meal have been reported by Keimer et al. (2018) (Figure 1). 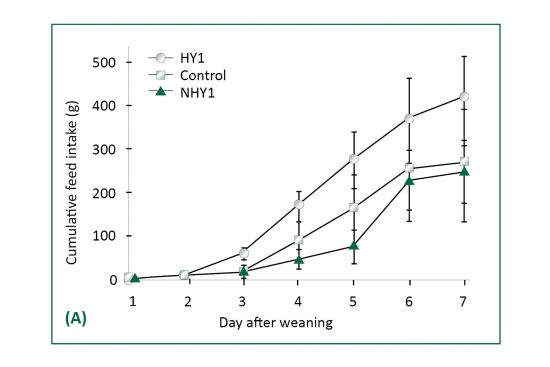 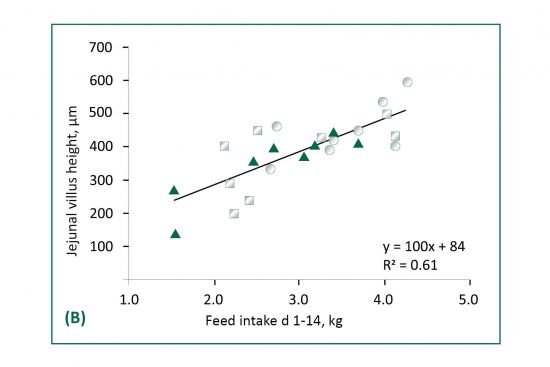 Hydrolyzed yeast – a good complement and/or substitute to blood plasma

A recent study investigated the effects of different protein sources such as 3% porcine blood plasma (PBP), 1% hydrolyzed yeast (TechnoYeast, TY) and the combination of 2% porcine blood plasma and 1% hydrolyzed yeast (BP+TY) on weaner performance compared with a simple soybean-meal (SBM) based diet. Overall performances as well as feed intake after weaning were on a very high level with all different high-quality protein sources. TechnoYeast-groups (BP+TY, TY) showed the highest feed intake before and after feed shift, which may indicate an improved gut maturity due to the multiple effects of TechnoYeast (Figure 2). The well-known phenomenon of a drop in feed intake after the withdrawal of blood plasma could also be observed in the current trial, but was not the case in the TY-group. Because of better feed intake after feed shift on d15, piglets from the TechnoYeast-group had a higher average daily weight gain compared to other groups after feed shift (483 vs. 564 g, P<0.01). A clear economical advantage for TechnoYeast-diets could be observed due to a lower feed price with the same or even better performance compared to PBP-diet (-8.67%). 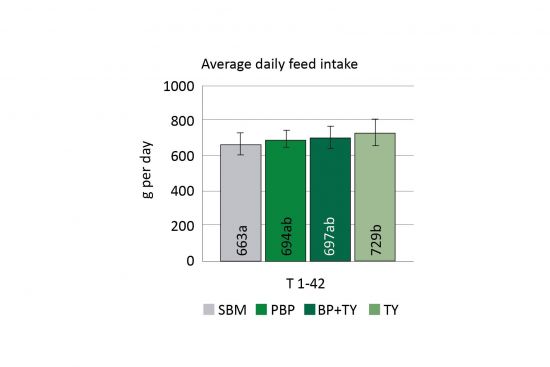 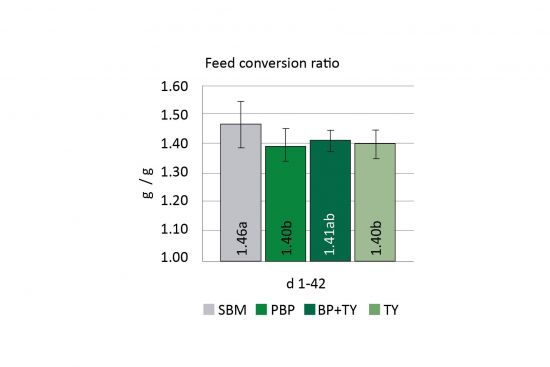