On track with the elements. Aspects of using organically bound trace minerals in cattle feed 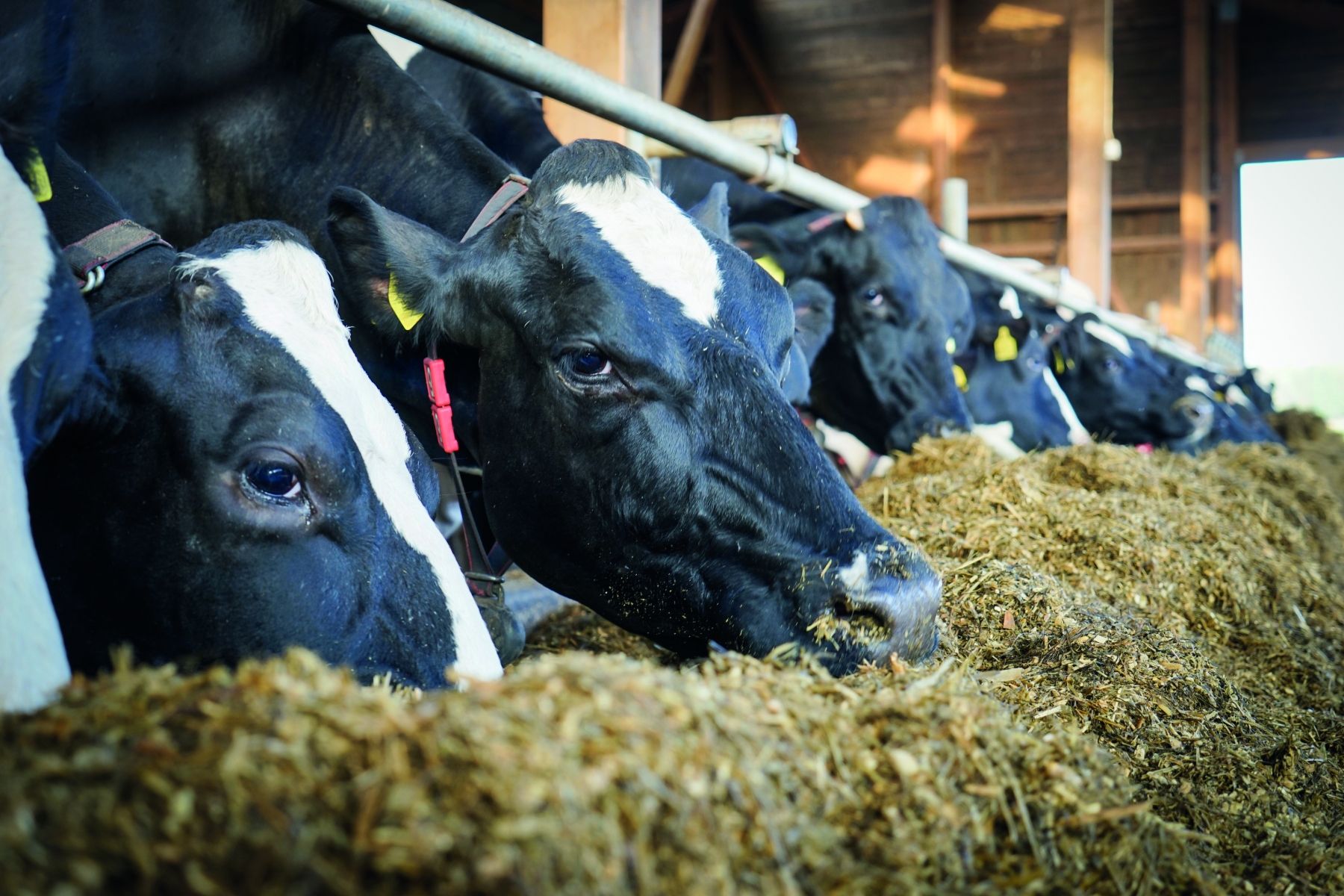 Trace minerals are essential in all animals for a wide variety of physiological processes. They carry out key functions in relation to many metabolic processes, most notably as catalysts for enzymes and hormones, and are essential for proper health status. The native levels of minerals in feed materials, especially in forages, can be highly variable as a result of many factors such as plant age, soil, fertilization practice, species, variety, seasons, and grazing pressure. For example, the content of trace elements decreases sharply with increasing crude fiber content. For cattle, the elements copper, zinc, manganese, cobalt, iodine and selenium are the most important, recommended to be provided via feed additives in mineral supplements and concentrates in order to fulfill requirements.

The native concentrations of these trace minerals in feed materials are often not enough or not bioavailable in an adequate amount to cover the animals’ demand in modern production systems. From 2015 to 2018 the concentration of zinc in silage was typically below the recommended level of 50 mg per kg dry matter (GfE, 2001) and analyzed samples showed high variations between and within years (Figure 1). That’s why it is often recommended to analyze forages for trace minerals, as far as the native content is considered for formulating the mineral content of feed. 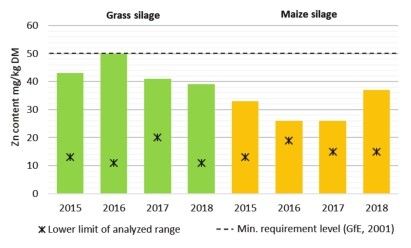 European feed law allows a wide range of trace mineral additives to be used in cattle nutrition and also regulates the maximum inclusion levels in the final feed. Because of environmental concerns the maximum allowed inclusion levels of some trace minerals have been reduced several times during recent decades. On the other hand, the following situations and factors are known to increase the demand for trace minerals in growing and breeding cattle: teat canal keratinization, regeneration after calving, environmental and physiological stress. If the diet does not provide adequate amounts of trace minerals, body reserves of the animals are impaired. In case of subclinical trace mineral deficiency non-specific symptoms such as reduced fertility, lowered milk yield, increased mastitis incidence, reduced growth rate or increased claw problems could occur in cows. An assessment of the trace element status of the animals, based on blood or hair analyses, as well as feed and water analyses, can help to reveal both primary and secondary deficiency situations. Due to the changing requirements during the production cycle and differences between individual farms and animals, the implementation of an adequate supply of trace minerals is a challenge. Although the requirements can be roughly estimated by the sum of demand for maintenance plus trace minerals needed for growth performance and milk production, it is difficult to estimate the true demand of the individual animal. When defining the requirements of high-yielding cows, the official recommendations often do not fit any more with challenging production situations and do not consider special health effects of some trace minerals. One example would be the positive effect of increased absorbable zinc levels on the reduction of somatic cell count in the milk, which is partly explained by positive effects of zinc on teat canal keratinization.

Absorption is affected by many factors, which makes it difficult to predict the true absorbable amount of dietary trace minerals from native and feed additive sources. Firstly, physiological influences like type and age of animal, gestation phase, trace mineral status, health level, or the intestinal milieu play an important role. Secondly, diet-related factors like antagonisms, feed composition or feed treatment must be considered. It can be assumed that in almost all feeding situations several antagonists, are present and interfere with absorbability of trace minerals. A well-known example is secondary copper deficiency either caused due to high levels of iron in drinking water or from increased concentrations of sulfur and molybdenum in feed. Finally, the trace mineral source itself affects absorbability due to differences in valency state of the metal, dosage level, and the chemical binding form. Depending on the specific chemical characteristics, trace mineral sources differ in solubility, pH interactions, and finally in their availability for absorption. Differences in bioavailability between several binding forms have been documented in vivo. Reviewing the literature, native trace minerals are assumed to be of low bioavailability. Sulfates are seen as beneficial compared to oxide forms, and organically (chelate) bound forms allow a higher absorbability of Zn, Mn, Cu, and Fe status than the inorganic forms.

Since the 1990’s several categories of chelates of zinc, manganese, copper, and iron have been introduced to the European market. From the feed law point of view, chelates are characterized by the binding of the mentioned metals to organic amino acid-based compounds. Historically, the first chelated compounds allowed in the EU were products based on trace minerals bound to hydrolyzed soy protein. Since 2006 different chelates based on only one single amino acid have followed.

The advantage of chelated forms is seen in the binding strength between metals and the organic compound, which is higher than that of simple ionic bonding, as present in most inorganic compounds like sulfates. During passage along the upper gastro-intestinal tract the chelated trace minerals are more stable and more protected against antagonisms than forms with ionic bindings, which easily dissociate in the rumen and are more susceptible to antagonisms. As a result, a higher amount of metal is available for absorption in the small intestine. In order to compare the efficiency of trace mineral compounds, measurements of absorption and body retention of trace minerals provide the most valuable information. The higher bioavailability of chelated forms compared to inorganic ones in the presence of antagonists has been proven in scientific studies, for example, Hansen et al. 2008 (Figure 2). An additional aspect is that with higher bioavailability of trace elements, it is possible to reduce the levels of trace element supplementation and hence excretion of environmentally critical elements like Cu and Zn via manure, which will be an increasingly important concern in the coming decades. 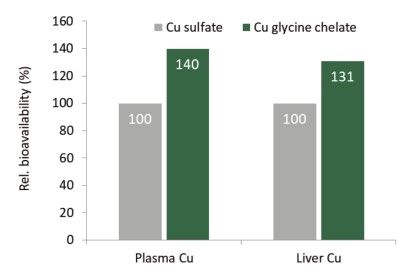 Another widely accepted method for evaluation of differences in bioavailability of trace mineral sources is to test them in animals fed below requirements, simulating situations of trace mineral imbalances. From such tests it is assumed that efficiency in supporting the animals’ trace mineral status is higher than with sulfates, but similar between the different chelate forms used (Figure 3). Thus, differences in technical product characteristics such as metal content or particle size distribution become of relevance in the choice of chelated forms by producers of premixes. Glycine-based chelates represent one of the most efficient organic sources of trace minerals in terms of bioavailability and technical properties. 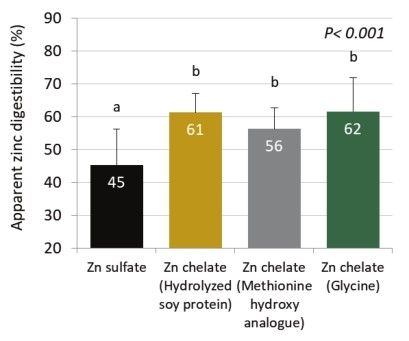 As shown in several field studies by Biochem, the use of E.C.O.Trace® minerals resulted in beneficial effects in dairy cows. These include improved udder health, fewer days open and better claw integrity, all relevant parameters for high lifetime performance. In a recent study in dairy cows on a commercial farm in Eastern Germany, the control group received a mineral feed providing of 1200 mg zinc, 800 mg manganese and 240 mg copper per animal and day originating from oxides and sulfates, whereas in the parallel test group the inorganic forms were partly replaced by glycine chelates by 40 %, 30 %, and 50 % for zinc, manganese, and copper, respectively. From the partial exchange of inorganic trace minerals with E.C.O.Trace®, the daily milk yield was markedly improved (37.3 vs. 35.9 L per cow/day). Furthermore, fertility parameters were improved; the percentage of cows pregnant at 120 days in milk (DIM) was significantly higher (Figure 4). The use of hormone treatment for heat activation could be reduced and the conception rate was increased from 33% to 42%. 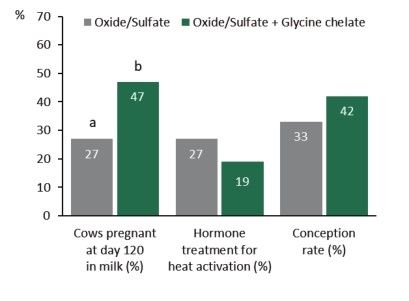 Besides breeding cattle, another important field for the application of chelated trace minerals is for calves. Most calves are born with a deficiency of trace minerals. Besides Se, I, and Mn, especially Fe, but also Cu and Zn are fed to young calves via milk replacer or certain supplements in order to reduce the risk of anemia and diseases. Calves require a sufficient supply for hemoglobin synthesis, growth, bone development and immune system. In a field study conducted at a dairy cow facility in Germany, glycine chelates (E.C.O.Trace®) were compared to sulfates in female calves via supplementation in whole-milk feeding during the first 8 weeks of age (Hildebrand, 2016). The daily dosage was 50 mg Fe, 15 mg Zn, and 5 mg Cu from sulfates or glycinates, solubilized in the milk storage tank. The field test demonstrated that supplementation of whole milk with essential trace minerals is required to support normal development of calves. The use of glycine chelates instead of sulfates was more effective in supporting hemoglobin synthesis and growth (Figure 5).

In conclusion partial replacement of inorganic sources by E.C.O.Trace® minerals ensures an adequate trace mineral supply to the whole herd, compensating differences between individual animals and changes in the environment. Moreover, dietary antagonisms and native contents in forages have to be considered. Applications of glycine-bound trace elements have superior bioavailability compared to oxides and sulfate, and thus the performance and health status of dairy cows and calves is improved.